Matt Tomasello in “Rodney Mullen on Bath Salts: Round Three”

When we first compared Matt Tomasello to some kind of drugged up version of Rodney Mullen, it was meant to be somewhat a joke, since bath salts probably don’t improve your skating (except in rare instances). But now, a year and two videos later, we still haven’t found a better way to describe Matt’s skating, but maybe it’s because there isn’t a better description. Matt’s skating, with all his folding and unfolding board contraptions, no handed pogos, and sideways grinds, slides, and flips, feels like just that. You even have to rewind it or watch it in slo-mo just to comprehend most of his clips. So for the final(?) installment of Matt’s trilogy, we’re sticking with comparing him to Rodney on bath salts. Enjoy it if you can, or click back to a simpler time when Todd Falcon was the most technically advanced skater out there.

“How old can I get and still act young?” Neal Unger, 60 year old proves that you can never be too old to have fun on a skateboard.

Rumble in the Jungle

Surfing the Tidal Dream – Hundreds of miles away from the next ocean wave, the Bono rolls its way up through the jungle of Sumatra. 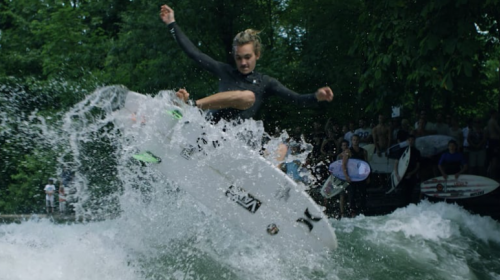